Social psychologist Jonathan Haidt has written an incredibly insightful book: The Righteous Mind: Why Good People are Divided By Politics and Religion. It goes a long way toward explaining how – and why – liberals and conservatives differ in their thinking and values. That alone is reason enough to read it. But it goes much deeper. 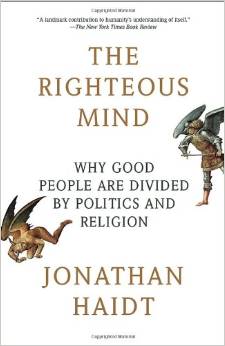 Haidt begins by examining where morality comes from, concluding that it’s some combination of innateness and social learning.  “We’re born to be righteous, but we have to learn what, exactly, people like us should be righteous about.”

The world’s cultures vary considerably in their “moral matrices” – that is, the emphasis they place on different virtues. For example, in Chinese and Japanese cultures the family and the well-being of the group are considered paramount, while western cultures put a higher value on individuality.

Haidt set out to find a universal set of moral “taste receptors”, analogous to the receptors on our tongues, which can sense a huge variety of flavors from different combinations of the five basic tastes: sweetness, sourness, saltiness, bitterness, and umami. Out of his research he developed his “Moral Foundations Theory” that identifies six foundations – i.e., basic scales of moral values – which, when combined in various proportions of significance, can describe the wide variety of moral matrices that humans ascribe to.

Each of the moral foundations had an original biological trigger:  a challenge our early ancestors faced for which the foundation was an adaptive solution. As a result, with a few pathological exceptions, we all have these foundations “wired in” to our brains, although they are expressed in differing degrees in different individuals.

The original biological trigger for the Care foundation is the protection of your own offspring from harm or suffering. This instinct can get extended to other people, even including people in faraway lands that you’re never likely to meet.

Robert Trivers’ theory of “reciprocal altruism”  notes that evolution can create altruists in a species where individuals can remember prior interactions with other individuals, and then be selectively nice to those who have been nice to them. This is the original biological trigger for the Fairness/Cheating foundation.

Haidt points out that there are two different views of what constitutes fairness. “On the left, fairness often implies equality, but on the right it means proportionality – people should be rewarded in proportion to what they contribute, even if that guarantees unequal outcomes.”

Humans are innately tribal, meaning that we tend to form cohesive coalitions which cooperate to compete with rival groups. We see this in sports, in business, and in warfare. The biological trigger for the Loyalty foundation is anything that tells you which members of your group are team players and which might be traitors.

The Authority foundation is based on dominance hierarchies found in species that live together in groups. Although humans often work together in small egalitarian groups, most groups of any size need to establish some form of leadership, where certain members are given higher levels of authority. As Haidt writes, “If authority is in part about protecting order and fending off chaos, then everyone has a stake in supporting the existing order and in holding people accountable for fulfilling the obligations of their station.”

Haidt writes, “The original adaptive challenge that drove the evolution of the Sanctity foundation was the need to avoid pathogens, parasites, and other threats that spread by physical touch or proximity.”  The emotion of disgust evolved to protect us from such threats.

“The Sanctity foundation makes it easy for us to regard some things as ‘untouchable’, both in a bad way (because something is dirty or polluted) and in a good way (because something is so hallowed, so sacred, that we want to protect it from desecration. Why do people so readily treat objects (flags, crosses), places (Mecca), people (saints, heroes), and principles (liberty, fraternity, equality) as though they were of infinite value?  Whatever its origins, the psychology of sacredness helps bind individuals into moral communities.”

Haidt suggests that the Liberty/oppression foundation “evolved in response to the adaptive challenge of living in small groups with individuals who would, if given the chance, dominate, bully, and constrain others. The original triggers therefore include signs of attempted domination.  The Liberty foundation operates in tension with the Authority foundation. We recognize authority in some contexts, but we are wary of those who claim to be leaders unless they have first earned our trust. We’re vigilant for signs that they’ve crossed the line into self-aggrandizement and tyranny.”

The Rider and the Elephant

Haidt makes a key distinction between two types of human cognition: intuition and reasoning. Intuitive responses to questions or situations are automatic; they come instantly and easily. Such automatic processes have controlled animal minds for hundreds of millions of years. Human reasoning is a relatively new invention; it’s much slower and requires more work. Haidt uses the metaphor of an elephant and a rider, the elephant being intuition and the rider being reasoning.

The elephant usually has an immediate response to moral issues. The rider is very good at making up post hoc explanations for whatever the elephant has just done, and justifying what the elephant wants to do next. This doesn’t mean the rider can never override the elephant – it can, but that takes a lot more effort than letting the elephant go where it wants.

The important lesson to take from this is that if you want to convince someone of something, you’ll usually fare better if you talk to the elephant – that is, appeal to the person’s intuition and emotions.

Haidt writes that Republicans understand moral psychology, and Democrats don’t. Republicans have long understood that the elephant controls political behavior, while Democrats often try to appeal to the rider with reasoned arguments. There are exceptions, of course, but this generalization is largely true, and it gives Republicans an advantage.

Haidt graphically illustrates the differences between American liberals, conservatives, and libertarians in the three charts below, using the thickness of the lines to depict the importance those of each political persuasion attach to the various moral foundations.

The Fairness foundation appears to be the one foundation that all three attach the same significance to. But it’s important to keep in mind that fairness means different things to different people: To liberals, fairness generally means equality; to conservatives (and I suspect to libertarians) fairness means proportionality. 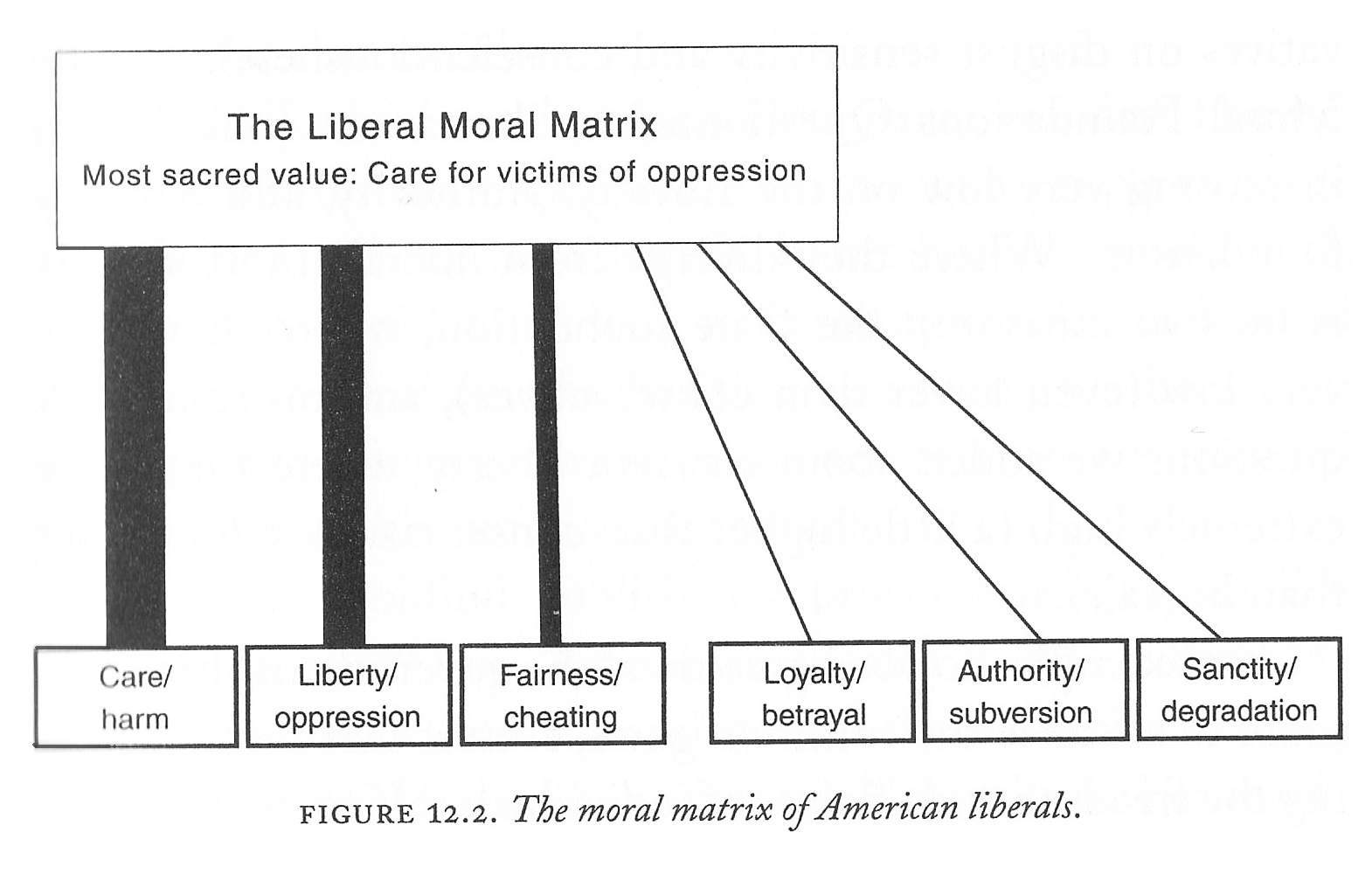 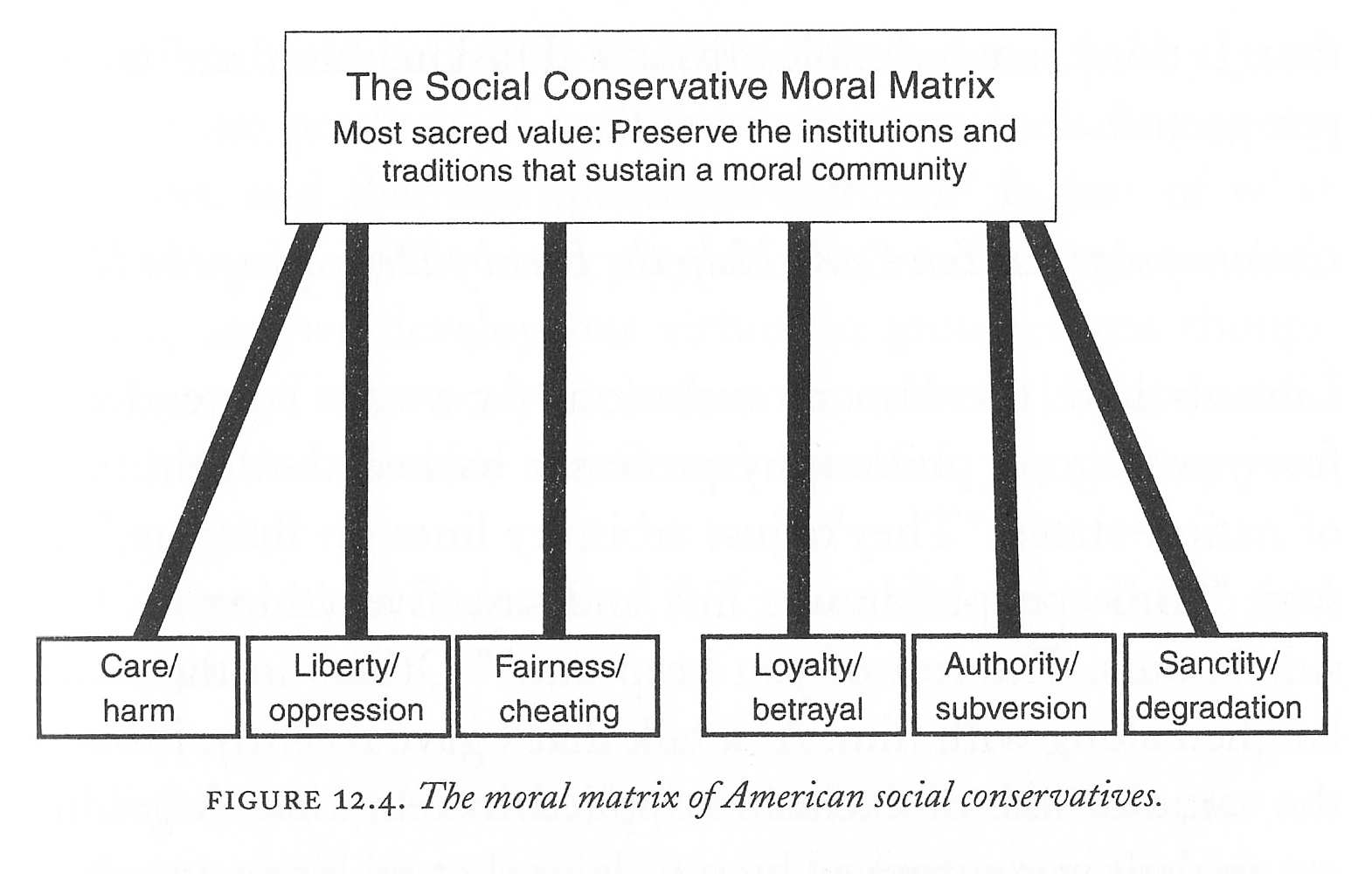 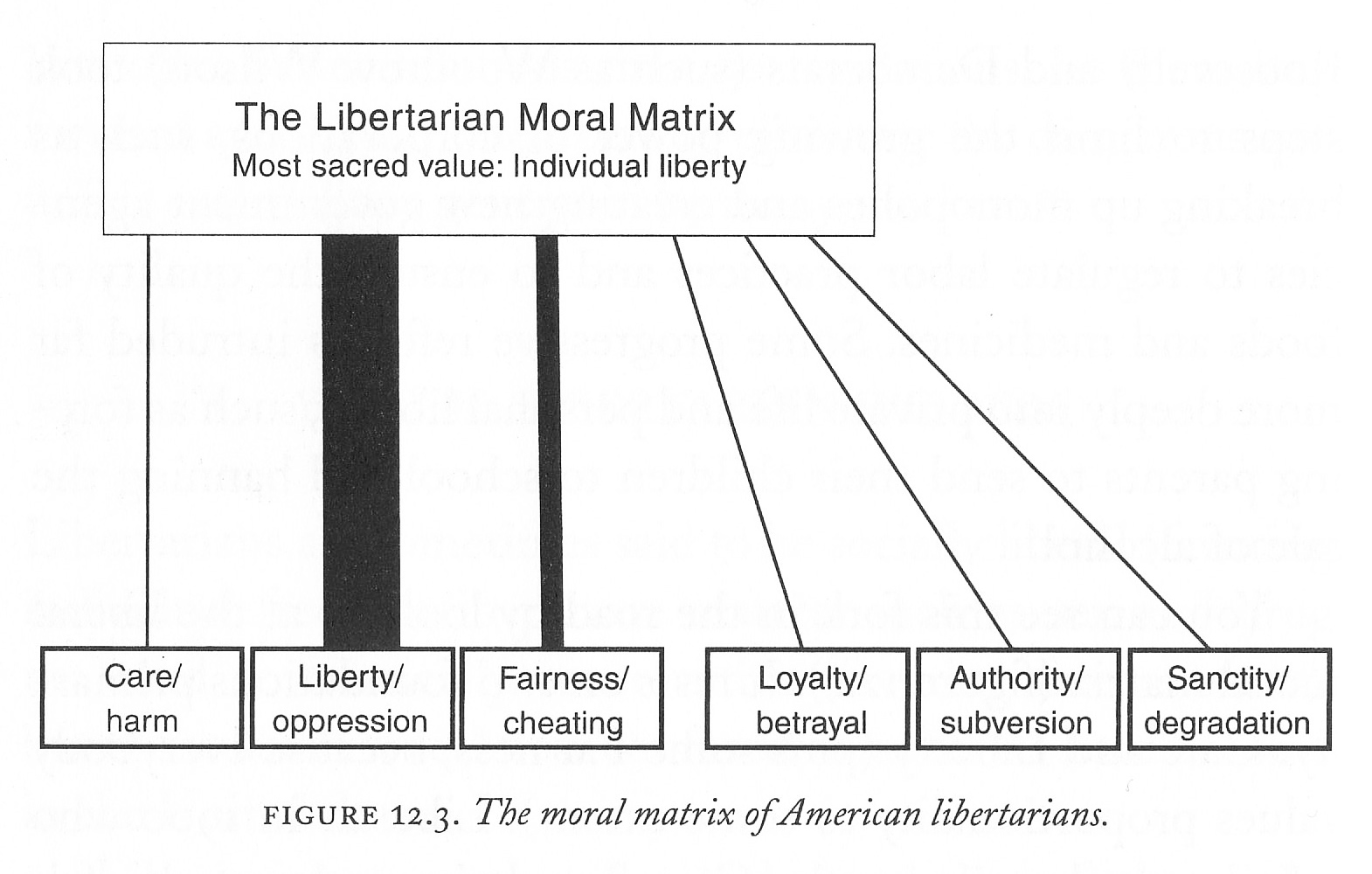 Why Can’t We All Just Get Along?

We don’t get along because we are operating from different sets of moral values. But what if everyone were to comprehend this? We’d still disagree about a lot of things, but at least we would understand why our opponents believe the things they do, and that it’s not because they’re idiots. Perhaps we would all be better listeners, and better at finding solutions.

More videos and information at RighteousMind.com